Breeding of ticks and mites

We breed standardized test insects of consistently high quality to carry out biotests and for sale.

In the following, some representative species which are significant both from a medical and a veterinary perspective are characterized in more detail.

Dermacentor reticulatus (Ornate cow tick)
The ornate cow tick occurs in Europe in the temperate latitudes, north of the Mediterranean climate zone and south of Scandinavia. It has spread rapidly over the last 20 years and has become the second most common tick species in Central Europe, also occurring in urban areas. It prefers open and semi-open areas such as forest clearings, heath landscapes interspersed with bushes and fallow land, preferably near rivers. The tick can also survive floods for some time. It is slightly more in need of moisture than D. marginatus, but in comparison to I. ricinus it can cope with much less humidity. The species is also active on sunny winter days as long as the daytime temperature rises well above 0°C. As with D. marginatus, the larvae and nymphs almost exclusively parasitize rodents, whereas the adult ticks only parasitize larger mammals. D. reticulatus becomes important as a vector of Babesia canis, the causative agent of so-called dog malaria, which can be life-threatening for dogs.

Area of distribution: In a belt of the temperate zone of Western, Central and Eastern Europe as far as Asia (similar latitudes). 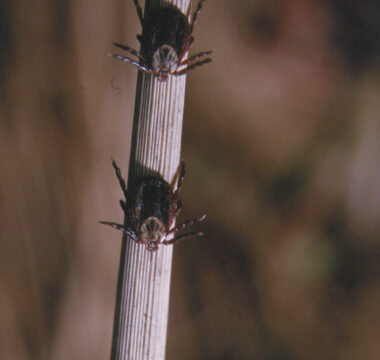 Female D. reticulatus questing on a dry stalk. In contrast to I. ricinus this species always sits upside down. 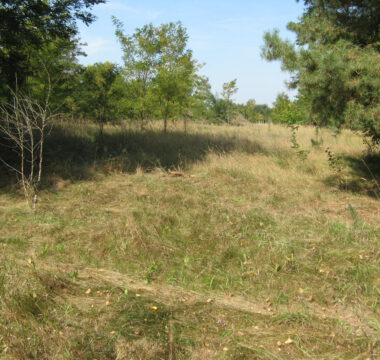 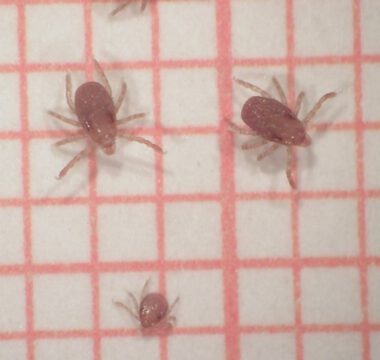 Larvae (bottom) and nymphs (top) of the ornate cow tick. The lateral, dark eye spots are clearly visible.
Hyalomma marginatum (Mediterranean bont-legged tick)
H. marginatumis a tick adapted to dry areas. In contrast to most other tick species, this one is a so-called hunter, i.e. it does not wait passively for a passing host, but heads actively towards it. It can cover distances of up to several hundred meters and uses its eyes to visually target the silhouette of its host. Another special feature is that the larvae and nymphs remain continuously on the same host animal for about 3-4 weeks to ingest blood. Because of this the ticks can be transported over long distances on migratory birds. In fact, every spring Hyalomma ticks (besides H. marginatum also H. rufipes) are brought to Central Europe by migratory birds from the South. Due to climatic factors, however, this tick species has not yet been able to establish itself in Central Europe. Yet the warm summer of 2018 with its unusually large number of Hyalomma individuals found in Germany shows that this could happen in the course of global warming in Central Europe. 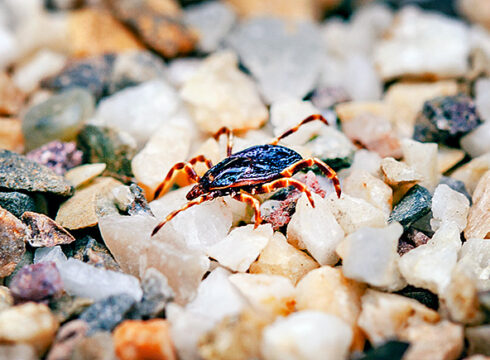 Hyalomma marginatum, host seeking female. The two eyes are located laterally at the front edge of the shield. Characteristic for this tick species are the brightly striped legs. 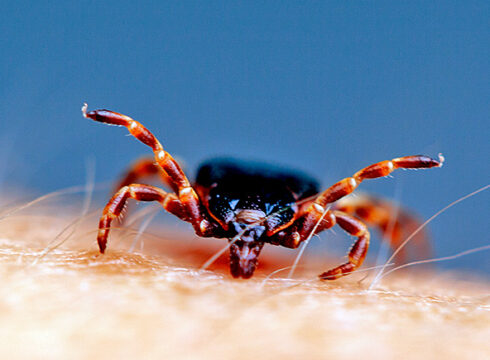 R. sanguineus is a tick specialized on dogs. It can be found in the closer vicinity, usually only a few meters away from the sleeping and resting places of dogs. Usually it lives there hidden in cracks and nooks in and on buildings, doghouses etc. and comes out only for sucking blood. The heat-loving tick does not exist outdoor in Central Europe, but can be brought in with dogs e.g. from a holiday in the Mediterranean area and then stay with us permanently in houses. If the tick has no dog host for a longer period of time, it also bites people.
This species is difficult to determine. Probably two or three different species with different ecological requirements exist under the species as we know it today.

Area of distribution: Originally probably native to Africa, today worldwide in urban areas of the tropics and subtropics (20°N to 30°S). In Europe mainly in the Mediterranean area, further north only sporadically inside buildings.

Hosts: Dogs are preferred by all developmental stages, only in exceptional cases are other hosts, such as humans, attacked. 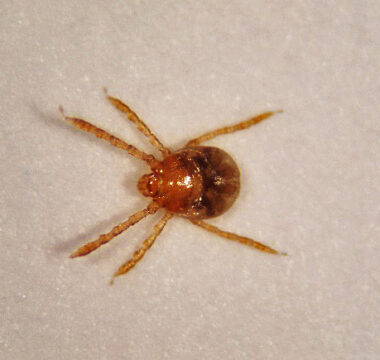 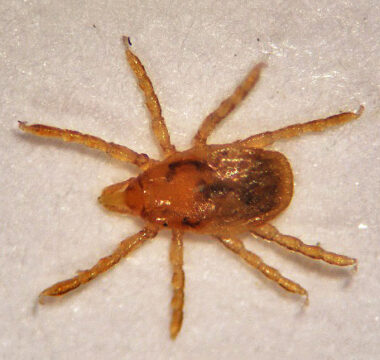 Nymph (about 1 mm) of the brown dog tick 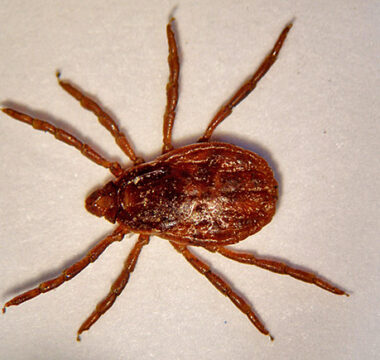 Female (about 2-3 mm) of the brown dog tick
Ixodes hexagonus (Hedgehog tick)
I.hexagonus is a so-called endophilic tick, which is not found in the vegetation, e.g. on blades of grass or herbaceous plants, and therefore cannot be caught with a tick flag. Instead, it lives hidden directly in the nest area or at the resting places of its hosts. Free running cats like to search for mice in the undergrowth and thus also come into contact with the hedgehog tick time and again. For this reason, it is not so rare to find female ticks, which are clearly lighter than the European sheep tick, on cats. Moreover, this tick species also copes well in human settlements, provided that there are green areas nearby and sufficient hosts such as hedgehogs, foxes, and also cats or dogs. On the contrary, humans are very rarely bitten by this tick species.

Area of distribution: The hedgehog tick is spread all over Europe.

Host: It parasitizes besides the eponymous hedgehog above all carnivorous mammals like dogs, cats, foxes, badgers and martens. 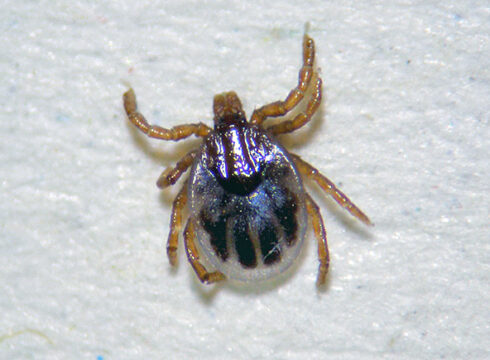 I. ricinus is the most common tick in large parts of Europe. As a typical forest dweller, it depends on high air humidity for survival. It can also be found in urban green areas (parks, gardens) and damp meadows, but rarely on open, sun-exposed lawns that remain dry for long periods of the year. The species parasitizes many mammal and bird species, even reptiles. All stages commonly bite humans too. I. ricinus waits, lurking in the lower vegetation, for a passing host to which it clings quickly. The species is the main vector of various pathogens, especially the agents of Lyme disease and TBE. In the last 25 years, the species has spread to higher altitudes (Alps), as well as further north (Scandinavia). This is accompanied by an increase in temperature in warm years during this period.

Area of distribution: Europe, in the East to the Ural Mountains, in the North to 69° N (Norway). In 2017 the first permanent populations were reported from Iceland.

Hosts: adult ticks: medium and large mammals. Larva/nymph: small to large mammals, various bird species. It commonly bites humans. About 70% of human bites are caused by nymphs, about 20% by adult ticks, the rest by larvae. 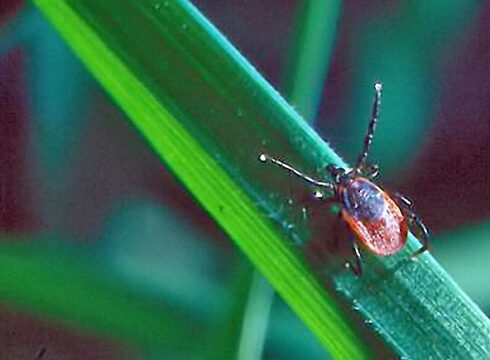 I. ricinus female in questing position 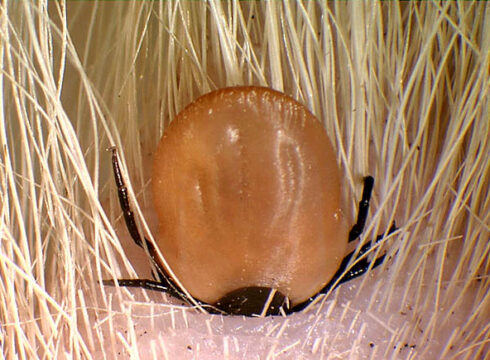 We deliver exclusively to companies and research institutes.